Do you have such terrible brain fog that you forget things and struggle completing the simplest task? Is your fatigue so overwhelming that you have trouble walking from one room to the other? Have you wasted years and thousands of dollars on doctors and expensive labs only to be told to take an antidepressant and that it was in your head, which left you more depressed? Do you fear that this is the best your life will be?

For years, Dr. Kines was frustrated that there were certain clients she was not able to help no matter what she did, and how hard they tried, including those with some autoimmune disorders. Once she realized that EBV was the missing link, she did not stop until she developed a complete turn-key evidence-based methodology for EBV recovery, which has since helped many people get their lives back. Contrary to popular belief and an outdated opinion in the medical community, “Mononucleosis, an Epstein-Barr Viral EBV Infection, is treatable and rapidly reversible” (Flavin, 2006). With the right support, you CAN heal and reclaim your life!

Not sure where to start? You are not alone. Recovery from EBV is such a new concept after all! That is why Dr. Kines created the Clarity Session. Click here and let Dr. Kines guide you on the best approach for you!

Select a Service to Start Your EBV Healing

Choose from the do-it-yourself or group and one-on-one services offered below. 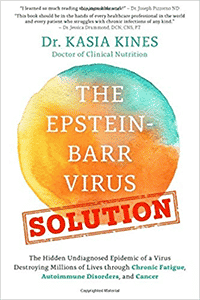 Self-paced options to help you start learning more about Epstein-Barr Virus and begin your healing journey.
The EBV Solution Book

Finally, a book with real solutions for both doctors and those suffering from Infectious Mononucelosis, chronic Epstein-Barr Virus and chronic illness caused by EBV.

“Within 3 weeks of following the protocols and suggestions in the book, I felt the best that I had in 6 years. (Amazon reader)”

“Best decision I made in the past 3 years I have been sick.”

“The Program saved my hearing and gave me back my life!”

Whether you need to trouble shoot and have specific answers for today or you want the entire healing journey, Dr. Kines has a service to benefit you the most.
A Single EBV Power Hour

A single session can save you years and thousands of dollars. You want an EBV expert to cut through the noise and strategize for you.

Experience not only physical healing from EBV but also deep transformation in the tight-knit community of 3 other EBV Heroes, in this 6-month coaching program under Dr. Kines’ close care. Apply here!

A VIP Day with Dr. Kines

Get a complete makeover, complete with a full assessment and the tailored protocol as well as a 30-day checkin!